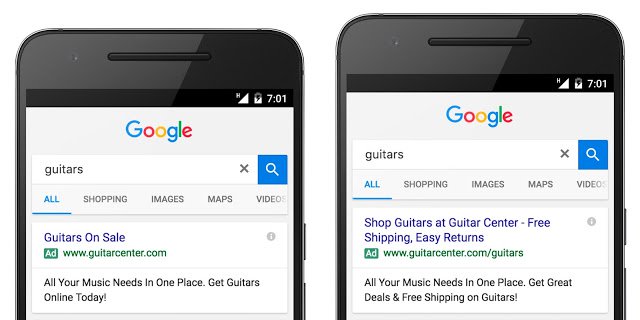 It’s a big day for online advertisers and brands advertising on Google! Today, Google officially announced that expanded text ads will be rolled out to all advertisers. E-Power Marketing received beta access to expanded text ads for our client accounts several weeks ago, (thanks to our status as a Google Premier Partner Agency) and preliminary results show significant improvements in clickthrough rates for this new ad format!

Along with the expanded text ad rollout, advertisers will now also have access to device bidding and responsive ads for the Display Network.

Last month when I attended SMX Advanced in Seattle, Google informed attendees that standard text ads would continue to run alongside expanded text ads for many months. Today we learned that new standard text ads will no longer be accepted in Ads after October 26, 2016. Google did not announce a date for when standard text ads will stop appearing in the search results altogether, though many expect that this date is still a long ways off.

So what should your next move be? Get the ball rolling on expanded text ads for your account. Start implementing and begin testing. But before you jump the gun, think your strategy through. Expanded text ads include two headlines, each with up to 30 characters and one description up to 80 characters. The extra characters mean more room for key phrases, calls to action and unique selling propositions. Use the extra space wisely! Don’t just throw together expanded texts ads by sticking in an extra headline on your current standard ads. Take the time to get creative with your messaging. Think about what you want to test. The extra time it will take to write a new, cohesive expanded text ad will more than pay off in the long run.

Device bidding is back

Remember back in 2013 when Google took away separate device bidding as part of Enhanced Campaigns? It was a tough transition for advertisers, and one that many were extremely displeased with (myself, included!).

It has taken three years, but Google has heard our cry! Device bidding is back! Many are calling this change “Un-enhanced Campaigns”, which I think is so fitting.

Some advertisers will see this option available starting today, and Google will continue to roll out to all advertisers in the next two months. Once you have these options available in your account, advertisers will be able to start setting bids for mobile, tablet and desktop (again!). 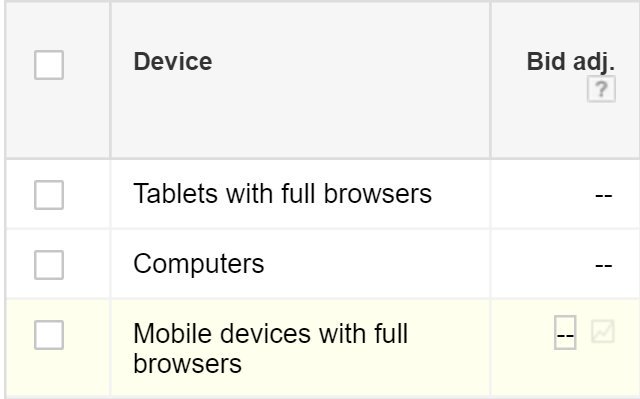 Prior to Enhanced Campaigns, it was best practice to split out your campaigns by device type. It’s not clear yet whether this is a practice advertisers will gravitate back toward (my guess is yes). It will take some testing and experimenting to know for sure, and what is best for one account might not be best for another. Stay tuned for more information on this topic!

Responsive ads for the Display Network

With a dramatic increase in the diverse set of screen sizes being used by internet users, Google is responding with ad formats that are more adaptable across various screen sizes. With the new responsive ads for the Display Network, advertisers will provide both 25 character and 90 character headlines, along with a 90 character description, an image, and a URL. Then, Google will automatically create multiple ads that will be designed to fit across over two million apps and websites. As an added bonus, these ads will also unlock new native inventory that Google has added to the Display Network.

I expect there to be a lot more discussion about each of these topics in the coming weeks as advertisers begin rolling them out to their accounts, implementing tests and drawing conclusions. Stay tuned for our findings!

As Director, Digital Advertising at E-Power Marketing, Ellie focuses on developing targeted advertising campaigns to boost sales, increase trade show and event registrations, drive leads and strengthen brand recognition. She has become an expert in all things online advertising, and expanded her focus to include Google Analytics and conversion optimization.

Is Your Website Ready for Google’s Page Experience Update?
March 4, 2021